BREAKING NEWS! There have been two exciting new developments concerning the APRHF Rail Rangers’ program on the South Shore Line that we are happy to share with you. 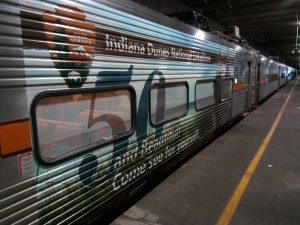 First, a meeting was held earlier this morning (Thursday, November 30, 2017) between the American Passenger Rail Heritage Foundation’s Board of Directors and management of the Northern Indiana Commuter Transportation District (owners/operators of the South Shore Line). The purpose was to assess how things have been going the past four months since Rail Rangers Interpretive Guides started giving programs on the train. Since early August, Guides have been aboard two to three Saturdays per month, doing a program round-trip between Chicago-Millennium Station and South Bend, Indiana. During the meeting, both South Shore Line and APRHF officials reported that there has been nothing but positive feedback received, with several dozen passenger riding specifically to hear the Rail Rangers’ live narration. This includes at least one group of senior citizens and a special excursion organized in early November by the National Association of Railroad Passengers for their Rail Nation Event in Chicago. Extensive media coverage, including from South Bend’s CBS affiliate, WSBT-TV, was also given to the program. The initial six-month “test period” was set to expire on January 31, 2018. However, due to the positive feedback received from passengers in the first four months, NICTD and the APRHF have agreed to waive the test period and a proceed immediately with a long-term agreement. Contracts will be finalized in the coming days and weeks ahead.

APRHF Vice President Robert Tabern says, “We are happy that our educational programs are beneficial to the South Shore, the APRHF, and most importantly – the passengers who ride between Chicago and South Bend. It is exciting our initial “test period” has been lifted and we can focus our efforts even more on providing a better quality program, knowing the deal is for the long-term now.”

The APRHF Rail Rangers began providing educational programs on publicly-operated trains in November 2016, when it partnered with Iowa Pacific Holdings to have Guides in the dome car on its Hoosier State train between Lafayette, Indiana and Chicago. Just three months later, Iowa Pacific lost its contract to operate the line. When Amtrak took operations back over in March 2017, the APRHF Board of Directors was informed Rail Rangers guides would no longer be welcome on the train. That decision resulted in many people contacting the Indiana Department of Transportation to have the Rail Rangers re-assigned to another route. The only viable option was the South Shore Line, which runs 90 miles between Downtown Chicago and South Bend Airport. South Shore Line/NICTD officials were very enthusiastic about the program, with the initial run taking place on Saturday, August 5th, 2017.

APRHF Vice President Tabern adds, “Our main focus with the Rail Rangers will remain private rail excursions. However, due to the costs of running private cars and their dwindling availability here in the Midwest, it’s nice to have a public program, too, that our supporters can enjoy. Instead of just six or seven private rail excursions per year, our fans can ride with us two to three trips per month on the South Shore if they want to. It gets our name and mission out there more, too. Plus, we know not everyone can pay for a private rail ticket. The South Shore is less than $30 round-trip for adults… making our educational programs accessible to just about everyone who wants to come out and join us and learn what is out their window.”

Meanwhile, APRHF President Bob Cox made the announcement today that the APRHF Rail Rangers have become official partners with the National Park Service. In the coming months, the Chief of Interpretation and Supervisory Ranger at Indiana Dunes National Lakeshore will be working with Rail Rangers’ Interpretive Guides to help them learn more about the park’s history and natural features. The result will be even better informed Interpretive Guides on the South Shore Line. The National Park Service will also promote the Rail Rangers’ program at its Visitor Center on State Highway 49 in Chesterton, Indiana, and possibly in its park newspaper and its website in the future. In exchange, the Indiana Dunes National Lakeshore will get to count the Rail Rangers’ hours towards its Volunteer-in-Parks program, which ultimately means more funding for the park. Even though the Indiana Dunes National Lakeshore is 150 smaller than Yellowstone in area, it has about the same amount of annual visitors and actually has even more diverse plant and animal species than places like Yellowstone or the Grand Canyon.

APRHF President Bob Cox explains, “This is a real win-win situation for both the APRHF and the National Park Service. The program on both private railcars and the South Shore will retain the ‘Rail Rangers’ branding that we have worked so hard to develop over the past three years now. We will not be merged into Trails & Rails again. Likewise, the black uniforms worn by Interpretive Guides will not change. We will be adding a National Park Service green Volunteer-in-Parks patch to the left sleeve to signify the partnership. And, we will strictly be dealing with National Park Service personnel at the local level in Indiana only. Plus, the APRHF Board of Directors will retain complete control over the day-to-day operations of the program.”

You may recall that the APRHF partnered with Amtrak and the National Park Service to co-sponsor a Trails & Rails program that operated on the Southwest Chief between May 2013 and July 2015. During the course of that program, Trails & Rails docents reached out to 50,000 passengers between Chicago and La Plata, Missouri. The program ended when Trails & Rails officials, based out of College Station, Texas, decided to terminate its agreement with the APRHF. The APRHF covered most of the costs of the program, including housing docents overnight at the Depot Inn & Suites in La Plata, MO on their layover. This moved displaced 35 Trails & Rails guides and has left Chicago without an interpretive program on any Amtrak long-distance train. The APRHF quickly rebounded by forming its Rail Rangers program, with the focus on providing onboard educational programs on private rail excursions. The Indiana Dunes National Lakeshore does oversees its own Trails & Rails program on Amtrak’s Wolverine Service, however this will be managed independently than the Rail Rangers program. Passengers actually see a lot more of the park by riding the South Shore Line than the Amtrak line; the South Shore Line actually has several stops located inside the park.

Because of the long-term deal being struck between the South Shore Line, the National Park Service, and the APRHF, the Rail Rangers program is now looking for new Interpretive Guide Trainees to volunteer on the South Shore Line. Those interested should send a resume to: vp@aprhf.org. Preference will be given to good public speakers and those interested in the National Park Service, travel, and history. Education or teaching or communications backgrounds a huge plus, too. Those interested in railroading are also encourage to apply, however be aware the program is more a general knowledge presentation and does not focus on railroad history very much, except on the rare occasion we have a rail history group riding with us.